Just What The Doctor Ordered (Part 2)

With all this globe-trotting and constant work, it’s little wonder that he has never settled down. He has homes in Los Angeles, New York and Hawaii and shuttles between all three, often staying by himself for weeks at a time. Friends say he has never talked of marriage as one of his ambitions. They believe he has never allowed himself to get that close to a woman and they think that, at 50, he never will.

He claims he has fallen in love time after time and says: "I would get married in a second if I wanted kids but, much as I like other people’s children, I don’t think I have room in my life for them."

"Marriage makes a lot of sense in terms of permanence in a relationship, but even if I did meet the perfect lady I wouldn’t warm to the idea of marriage because I have an uneasiness about contracts. But if I really loved her and she wanted to, I suppose I probably would."

"There have been moments with certain woman whom I have loved when I seriously contemplated marriage. But I think I’m frightened at the thought of being subject to the whims of another person who might well attempt to dictate how I should live my life. I’m so used to doing things my own way, doing what I want to do, going where I want to go."

The boyish-looking Chamberlain still blushes and looks uncomfortable when the subject of his lovelife is brought up. Too polite to tell you you’re asking questions that are too personal, he tries to make light of it. "I’ll tell you about my worst date," he says with a grin. "It was with a very tall acrobatic dancer who was much stronger than I realised." His favourite way to spend an evening, he says, is "going to a good movie with Linda Evans and then to Fatburger for a juicy chiliburger." 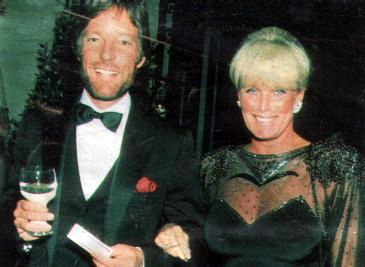 Happiness for Richard Chamberlain is a night out with Linda Evans.
Plus a chilliburger, of course, for the star of his favourite show!

Richard and Linda, the gorgeous blonde star of Dynasty, now a bachelor girl after two divorces, have been close friends for years. Hollywood gossips, not to mention the couple’s own friends, tried hard to push them together, but both laugh at the idea of marriage. "My favourite show is Dynasty," he says, "so can you imagine how I feel going out with Krystle herself?" The two stars have a lot in common: both are naturally shy, polite people who don’t enjoy the razzmatazz of Hollywood. Richard has introduced Linda to his Dr Joy beliefs, while she has interested him in her pet passion of numerology, a way of telling the future by studying numbers.

Surprisingly, for someone who is usually so tight-lipped about his private life, Chamberlain recently revealed that he fell in love with Rachel Ward when they were filming The Thorn Birds. But he comes across more as an actor who makes a habit of falling in love with his leading ladies -almost as if they would be offended if he didn’t- rather than a hot-blooded lover.

"Rachel and I knew each other only too well," he says. "We established perfect harmony -even love- during our work. I had to make Rachel fall in love with me if she was to be convincing. And I had to fall in love with Rachel, which was hardly an enormous task. Perhaps we both over-acted, I don’t know. Remember, this was her first starring role and she would often arrive on the set highly-strung. To relieve her tensions she would cry. I’d take her into my arms. I felt great affection for her, a caring I haven’t felt for many of the actresses I’ve worked with."

"Rachel’s one of the sexiest women I’ve known. She oozes desire with her husky voice. She has a unique way of walking, as if stepping on ice, and she needs to be protected. A man feels he wants to put his arms around her to take care of her. Anyhow it’s over. But the affection and love I felt for Rachel will always be there and she knows that."

Chamberlain himself has won the respect of everyone he has worked with. Only once has he lost his temper in front of his fellow cast and crew -on the set of The Thorn Birds. He grew more and more furious and frustrated when he couldn’t get his lines right and punched a camera stand, badly bruising his own hand. Otherwise, his behaviour had been every bit as courteous as … well, the charming Doctor Kildare.

Stan Margulies, the producer of Thorn Birds, says: "I still do not know Richard that well. He’s had 25 years of learning how to keep you away without losing his temper and also without making you angry."

Chamberlain keeps his private life private. He’s reluctant to talk of his distant past, which included 16 months in the US Army in Korea, and his pre-Kildare working days as a supermarket delivery boy. Few people have been inside his fabulously decorated home in a quiet, airy Japanese style after his six-month stay in Japan working on Shogun. And even fewer have visited his simple holiday home in Hawaii or his small apartment in New York. He keeps two Dalmatian dogs and a couple of cats in Los Angeles and says his great joy, when he is home, is taking the dogs for a run. 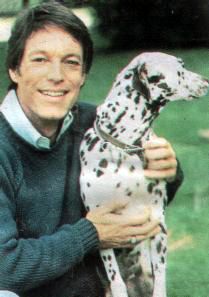 He doesn’t smoke and his favourite tipple is milk. Alcohol is out -in fact, he says, his worst habit is staying up half the night watching television shows like Hill Street Blues -and Dynasty, of course. But he does have plenty of interests, all the same.

He collects paintings -"I’m a sucker for them" -and paints watercolours, but is too shy to show them to people other than close friends. He’s also learning to cook and has a most unusual habit -he designs and makes stained glass windows.

"But more than anything I love travelling, just getting on planes, getting off, seeing as many countries as I can, meeting people in their own environment, talking to them as one ordinary person to another," he says. He even spent a few months in the depths of Peru, staying at remote monasteries. "It’s wonderful when I can be in a country where no one has ever heard of Richard Chamberlain. It’s helped me to relax, helped me to avoid thinking of myself as a star."

"I’ve a lot to be tremendously grateful for these past 25 years but sometimes it’s so nice to be able to walk around without someone, somewhere saying: ‘Hi, Doc ... What’s up?’"