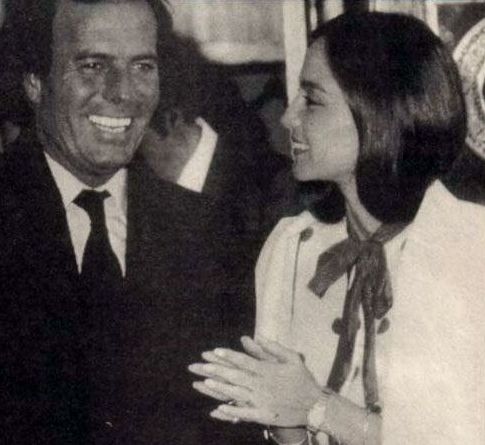 King of television mini-series links up with yet another stunning beauty but this time it may be the real thing.

Richard Chamberlain has become captivated by the strikingly beautiful first wife of singing heart-throb Julio Iglesias. Friends say the Thorn Birds star, still boyishly handsome at 50, is completely enthralled by Isabel Preysler, a renowned jet-set Spanish journalist. They met when she flew to Africa to interview him, and Chamberlain even insisted that she pose with him for 13 photos that accompanied her article in a Spanish magazine. "Richard has stars in his eves for Isabel," said a friend. "He is absolutely captivated by her." Chamberlain, who has never married, met Isabel on the set of his big screen film remake of King Solomon's Mines, in the wilds of Zimbabwe. "What started out as a brief interview turned into a marathon session," the friend said. "He insisted that she stay on with him at the remote jungle location and she agreed immediately. Richard has invited her to return to Hollywood with him when he has finished shooting. They have also discussed the possibility of Isabel going to Richard's retreat in Hawaii later this summer. It certainly appears to be the beginning of a major romance for him." The Philippine-born Isabel's classic beauty first captured Julio lglesias' heart hack in 1970, while the sexy singer was rocketing to superstardom in Europe. Their marriage was annulled January 20, 1979 -their eighth wedding anniversary -and she went on to build a name for herself as a top journalist. She has since married a Spanish nobleman, the Marquis of Grinon. Chamberlain, whose triumphs in The Thorn Birds and Shogun made him the king of TV mini-series, has been linked in the past with many beauties -including Dynasty's Linda Evans. In addition to Linda Evans, the actor has confessed that his screen lover in Thorn Birds, sultry Rachel Ward, smote him. Another of the women his life was young and beautiful Taryn Power, daughter of the late screen heart-throb "This time he's really smitten," other friend said. "Isabel fits his description of the perfect woman. She's affectionate, intelligent, and has an incredible sense of humor. Above all, she appears to truly understand the essence of life and love -something Richard has searched for in a woman." Friends agree that Chamberlain seems to be totally engrossed in the dark-haired Spanish writer. "Richard talks to her about his deepest beliefs and his faith in God and an afterlife," the friend said. "These are subjects he hesitates to share with just anyone."