Chamberlain eager to talk about life he once despised 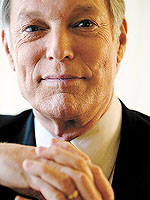 Richard Chamberlain is ready for his close-up. Buffed and preened, he far outshines the tan blandness of his Century City hotel room. Chin up, chin down, head slightly left, now right. As a photographer clicks, he switches brilliant smiles on and off like a light bulb.

Chamberlain finally has aged a bit, after decades of what some incorrectly perceived as surgically induced youthfulness. But he is still a matinee idol, king of what used to be called "prestige television," the world's reigning crowned head of the mega-hit TV miniseries. To millions, he remains indelible as Father Ralph de Bricassart, the conflicted young priest of "The Thorn Birds" (1983), or John Blackthorne, the conquering hero of "Shogun" (1980), both still popular enough to air 20 years later. ("Shogun" starts July 13 on the Hallmark Channel.)

To millions who saw him on worldwide theatrical tours through the 1990s, he is Baron von Trapp or Henry Higgins. Or Cyrano, Richard II or Hamlet, whom he played in England to excellent reviews.

He is also something else, as of this month, with the release of his new memoir, "Shattered Love" (Regan Books). Richard Chamberlain is out. He has outed himself, after decades of pretending he was something he is not: heterosexual.

After decades of eluding questions and fudging replies when interviewers inquired about his private life, Chamberlain now seems eager, in fact elated, at the prospect of talking. His answers are sometimes surprising -especially for those who think that "coming out" is no problem nowadays.

Just weeks ago, before his book was released, Chamberlain worried what would happen on the tour to promote it. "I expected to be shunned, stoned, expected crosses burning on my lawn," he says only partly in jest. "I expected people to hate me."

In fact, Chamberlain had no intention of outing himself when he sent a five-page book proposal to Judith Regan, of Regan books, who published the memoir.

All five pages were about spirituality, he says. "They described my belief system...a kind of philosophical treatise on how we might learn to live our lives more fully."

Regan must be some smart cookie. Chamberlain says she told him it was all "very interesting but needed to be a little more personal. Readers have to see how these ideas grew out of your life experiences."

Did she know he was gay? "Of course she did," he answers with a laugh. "The whole industry knew. And I knew they knew. But I didn't think the general public knew about it."

So there he was, at home in Hawaii with Martin, his partner of 26 years (who prefers his last name not be published) -and with no great job offers coming in. "The phone had stopped ringing. It was as if fate had given me the time and fortitude to do what I had never imagined doing."

Writing the book turned out to be "the biggest learning experience of my life...I suddenly realized that saying I'm gay is no big deal. Who cares? The only people who care are the ones who have the same wrong ideas in their head that I've always had -that being gay is a terrible, dirty, horrible thing to be."

And how have his fans reacted to the news? "Everyone has been so supportive, so positive, so friendly on this tour. In New York, people walked up to me in the street, and in theaters. Strangers gave me the thumbs-up, wished me well, said, 'Good for you.' I am just awe-struck by the change in the way I feel about life now."

Chamberlain says he hated himself for being gay. "I was as homophobic as the next guy." This duality caused him to become two people, he says: "the good Richard" -the handsome, straight leading man- and "the bad Richard" -a gay man and, therefore, beyond contempt.

His blue eyes are huge and brilliant now, his voice booming with audible awe, at the enormity of his realization. "Sixty-eight years it took me to realize that I'd been wrong about myself. I wasn't terrible at all.

"And now, suddenly, I am free, out of the prison I built for myself. It's intoxicating. I can talk about it positively because I'm not afraid anymore."

In this era of sexual openness, how could he have clung to the idea that he was rotten because he was gay?

Does he wish he had come out sooner?

"I am so happy that it happened at all. I can see where I started, and I can see what I've come to. The contrast is so great and my joy so enormous that I haven't got any regrets at all."

On the Web: For more information, take a look at richardchamberlain.tvheaven.com