The doctor is out: New memoir, new honesty from TV's 'Dr. Kildare' 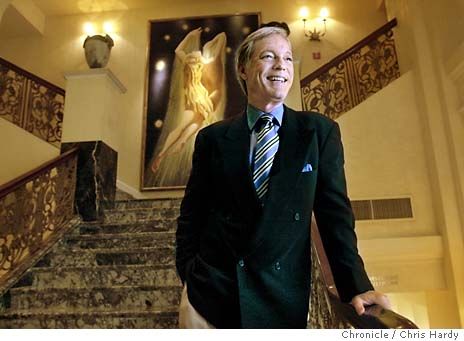 Richard Chamberlain is jubilant, practically bouncing with happiness. He's just found out that "Shattered Love," a new memoir that he wrote without the help of a ghostwriter, has landed on the New York Times best-seller list.

"Isn't that incredible?" he asks, bounding into the lobby of the Hotel Monaco after getting the news by phone from his publisher, Judith Regan. "My little book!"

Chamberlain's "little book" has been all over the media in the past couple of weeks, primarily because he comes out in the memoir -finally- and acknowledges that he's gay. After decades of protecting the "fiercely guarded" image he first established on the popular TV drama "Dr. Kildare" (1961-66) -and polished with the miniseries "The Thorn Birds" and "Shogun" in the '80s- Chamberlain is clearing the air at last, and says he's renewed as a result.

"I'm 69 frigging years old and I've just come to this!" Chamberlain says in a voice that's giddy and incredulous. "Can you imagine all those years of fear? Not that I never had a good time, of course. I have good friends and I loved my career and all. But there was always this undercurrent of grngg- grngg" -he makes a low, grinding noise- "like something was wrong."

Before he wrote the book, Chamberlain says, "if somebody gave me a sideways glance I would think it was my problem. And now! Somebody does that, I go, 'What's in your head that you're cringing at, that you're sneering about? It can't be me, 'cause you don't even know me. I'm happy!' Do you know what I'm saying? It's quite miraculous."

He may be 69, but Chamberlain looks 20 years younger and exudes a kind of dazzling boyishness. He speaks in italics, grins constantly, laughs with astonished relief at the burden he's no longer carrying.

"The whole experience still seems too good to be true. It's almost like having a dream where you can fly. I have a slight hesitation to talk about it because I don't want to tempt the gods with any kind of hubris."

One has to ask: With all this good will streaming toward him, and the sense of relief he now feels, doesn't Chamberlain wish he had taken the step of coming out much, much earlier?

Surprisingly, he says he doesn't. "If I could have had this realization and this freedom earlier, that would've been great. But I still would have been hesitant to talk about it in the '80s when I was doing a lot of romantic leads. Hollywood is tough, and I might not have gotten hired for some of the things I did, like 'The Thorn Birds.' "

Even in the early '90s, he says, when tabloids outed him -as well as several other gay and lesbian celebrities- he wasn't ready to come out. He was surprised by the lack of negative reaction to the outing, he remembers, "but it didn't alter my own self-rejection of those areas of my being."

So goes the absurd and often sad dance of the homosexual leading man. Like Rock Hudson, who maintained a public charade of stoic heterosexuality until he was diagnosed with AIDS in 1985, Chamberlain put his career first -meticulously constructing a front for the public, disguising, as he writes in the book, "titanic shame and fear."

In "Shattered Love," Chamberlain describes his Los Angeles childhood with a domineering, egotistical father and long-suffering mother; his nascent days as an actor; his breakthrough in "Dr. Kildare" when his blond, muscular looks made him a pop idol; his experiments with LSD; and various encounters with Katharine Hepburn, Princess Margaret and Elizabeth Taylor.

The late princess, it seems, had a crush on Chamberlain and invited him on a double date with another couple when she was still married to Lord Snowdon.

Hepburn, his co-star in "The Madwoman of Chaillot," is remembered as starchy and judgmental. When filmmaker Federico Fellini visited the "Madwoman" set, Hepburn slammed his movies ("Like that crazy Picasso, you've gone berserk") and retired for the evening at 8 p.m. "She is afraid of the night," Fellini coolly remarked. "She is afraid of her dreams."

Chamberlain devotes long sections to his spiritual and philosophical beliefs ("The veils of my soporific ignorance ...were parted slightly by some divine breeze of grace"), and discusses with warmth and appreciation his partner of 26 years, director-producer Martin Rabbett.

Rabbett worked with Chamberlain on the book, organizing material, jogging memories and encouraging the disclosure of his sexuality. Now that the book is out, Chamberlain says, "He's so happy that it's successful. I mean" -he pauses for a moment, composing himself- "he's so happy about what's happened to me in the course of all this."

That Rabbett managed to stay with him throughout the decades of secrecy, he says, "is another miracle in my life. In the beginning, my career was my real love. He was secondary, I thought. It didn't turn out that way, but if somebody called for a miniseries, I was off. I was very self-involved."

It's strange, given that Chamberlain's book is devoted to principles of honesty and shamelessness, that he refers to Rabbett in the book only by his first name.

"We talked about it and he, maybe in some illusory hope, wanted to keep some little distance from this whole thing. He knew there would be a lot of hoopla and a lot of publicity. Of course I talk about him a lot, and he was totally in favor of my doing it. He just wanted to keep a little personal distance from it."

Writing the book, Chamberlain says, "opened a channel of personal exploration" that allowed him to realize that "being gay is a non-issue" -a fact of life that becomes a problem only when it's twisted by the prejudice of others.

Reminded that Sir Ian McKellen said his acting improved after he came out, Chamberlain says he's anxious to see how that transition manifests next month, when he opens in "The Stillborn Lover," a play by Canadian author Timothy Findley, at the Berkshire Theater Festival in Stockbridge, Mass. Rabbett is directing.

After he got the news about the New York Times best-seller list, he says, "I was talking to publisher Judith Regan and she said, 'Do you feel like a new person?' I said, 'Yes, but I'm still getting acquainted with this new person.' "

Since the book came out, he says, "I'm on the verge of tears all the time. Happy tears. I talk at these book signings, and I have to really work not to weep. It happens to be a problem of mine, anyway. When I get close to the truth, whatever that is, I tend to tear up."