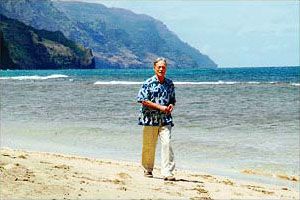 Some 20 years ago, long before scandals of priests taking advantage of altar boys made the headlines, a television miniseries created a ruckus of its own.

Richard Chamberlain was publicly scorned after he played the part of a Catholic priest who committed the sin of lust after a young Rachel Ward (Meggie Cleary) in the television miniseries version of the best-selling Australian novel "The Thorn Birds."

Chamberlain returned to Ke'e Beach -a key romantic location in the TV series- Monday to film segments for a special 20-year anniversary DVD on the controversial series scheduled for release in time for holiday shopping.

"Rolling in the sand is slightly uncomfortable, but it looks good," Chamberlain remarked as he strolled down the sandy bay.

"This beach is one of the most pristine in the world," he said. Ke‘e was featured in one of the final scenes, as Chamberlain's "Father Ralph" and "Meggie Cleary," played by Ward, finally consummate their life-long relationship.

Kaua'i was set as the tropical sugar cane country of Queensland, Australia in the film. A shoot at Waikoko, on the west end of Hanalei Bay, was also scheduled for Monday afternoon.

Chamberlain won a Golden Globe award for best actor in a miniseries or a TV film for his role in "The Thorn Birds."

Other parts of Kaua'i were also seen in the filming, including Wailua Beach and Hanapepe. Many Kauaians were cast as Australian sugar cane workers and other roles.

Set primarily on a fictional sheep station in the Australian outback, the melodrama focused on the Cleary family over 40 years.

Over the years, the family survived numerous deaths and disasters. The miniseries was first shown on ABC in 1983.

Footage that includes Chamberlain reminiscing about his role in the 10-hour series while walking along Ke'e Beach will be used as bonus footage in "The Thorn Birds" 20th anniversary, special-edition DVD on Warner Brothers Home Video.

The still-handsome and charming 69-year-old actor and Honolulu resident will be seen in a DVD featurette, driving up to Ha'ena State Park in a shiny, black, Mustang convertible, exiting the car, and looking completely awed by beauty he hasn't seen in two decades.

"Beautiful; perfect," Chamberlain said, even after the cameras stopped rolling.

Viewers of the special DVD will also be able to experience the memories of other stars of the miniseries, including Ward and Brown, who will both be filmed in Australia at locations used in the show. Out takes and unreleased footage will also likely be included.

Chamberlain moved to Hawai'i years ago, and recently published a tell-all memoir, "Shattered Love," in which he discusses his beliefs about life. He reveals in the book that he is gay, which drew national headlines following the book's release earlier this year. The book took him several years to write, from his home on O'ahu, he said.

He related the myth of the thorn bird's song to his belief that "What we are is shattered love." The thorn bird can only sing when it impales itself on a sharp branch, and its song is so beautiful that even God stops to listen.

That is a metaphor for suffering in the world, he says.

He said he believes all people are part of an all-knowing, perfect love that existed even before the Big Bang that created the universe.

That love was "shattered" into all beings. He acknowledged that his belief is very different from the traditional Christian view that beings become one with God and love only after death.

"We're not just finding our way back, we're all a part of this divine and perfect love," he said.

Chamberlain, considered one of the heartthrobs of the 1960s, starred in the hit TV mini-series "Shogun" and the TV series "Dr. Kildare," and has picked up numerous stage and screen credits since.